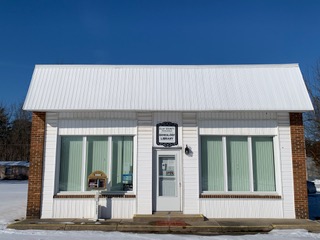 uring the renovation and repair of the library, it was discovered that the building has several floor-to-ceiling cracks in the plaster walls as well as the outside walls.  The bricks have been tuck-pointed in the past; however, the repairs are now failing.  We have contacted experts to assess the situation and give estimates on how to mend the cracks to secure the building while we raise money and explore grants to construct a new one.

The Clay County Genealogy Society has been fortunate to house the library in an historic building in Center Point that has been the home to several businesses in the past 100 years.  The original decorative tin ceiling that has been preserved is a highlight of the library; however, the building was built at a time when materials were not as structurally reliable as they are now, and the walls are beginning to fail in several locations.

The foundation is on the original stone that was used for the previous building that stood there in the late 1800s; that building burned down in the early 1900s and was replaced with the current one.  As a result of being built on the 1800s stone foundation, the building is not on a strong footing.  It can shift with freezing, thawing, and heavy rain events.

The library has been in this building for nearly forty years.  During that time, we have installed a concrete floor and floor jacks in the basement, had dehumidifiers running, installed a new heating/cooling system, put on two new roofs, installed wall to wall carpet, upgraded the computers and the copy machines, and purchased a new microfilm/reader/printer.  Now it is time to build a new library to continue to protect the vast amount of genealogy resources that it houses.  A considerable amount of the library materials is irreplaceable and cannot have a monetary amount assigned to the collection even for insurance purposes.

We had planned on installing a new handicapped entrance to the front of the library, and several members have given generously towards that purpose.  The new ramp was to have been installed before Covid-19 reared its ugly head, which slowed the progress on that project; we have been waiting impatiently for the ramp to be built.  In retrospect, maybe it was good that we were not able to accomplish that goal, since we now have to look at building a new library.  We will use those donations received toward installing a handicapped ramp for the new library, which we are planning on building adjacent to the current one.

We are exploring various money-making projects and grants to accumulate the funds necessary to finance a new building.  We are fortunate to have acquired the lot adjacent to the library this past spring and hope to keep the current library open while the new building is being constructed there.

New posts will be made when more information about the size, cost, and ways to obtain funding for a new building is available.

Town of Kussuth in Lewis Township

In 1850 J. M. H. Allison platted a town named Kossuth on a bluff a short distance south of Neal’s Mill, at a point directly west of Middlebury in southern Clay County.

Founding Kossuth on the southwest bank of the Eel River made necessary the opening of a road to Middlebury as an outlet to the east.  In the year of 1852 this road was cut from the hillside west of Middlebury (now known as Martz) to the Eel River.  The district road hands were called out to perform the work; however, they were not in any pleasant mood over the task.   As a result, it was agreed among them that they would have a race by dividing into two parties to cut the road across the river bottom lands.  The supervisor laid out the ground by running a middle line the length of the road (about three miles) and assigned the parties to their respective places.  The timber was to be cut so that it fell inward from both sides.  The two parties of axmen began the slaughter of the towering forest and completed the work within three days.  It was not recorded which party won the race; however, the Kossuth Road is now a part of Indiana Highway 246.

To an observer standing on the Middlebury Hill, looking westward along the line of fallen timber, it appeared as if a tornado had mowed a swath through the dense forest, felling trees as it went.  Those who planned the town of Kossuth wanted a bridge to be built to cross the river at the point of the town plat, which was then known as Hooker’s Point.  Prior to the building of the first Kossuth Road bridge a ferry was located at that point.

Kossuth Road ran through Middlebury, where it was named Jackson Street.   Middlebury stands upon what is known as “Sand Hill,” which is a mound of several hundred acres of sand of irregular outline.   Prior to the building of the macadamized roads, the town could not be approached from any point of the compass without a heavy pull through deep sand.

Within a mile and a half of the town of Middlebury was a swale, or pond, covering the public road surface and a limited area two feet or deeper alongside the road.  The water surface bordering the roadway on the south side had been a skating-rink in winter and a froggery in summer.  To make the road passable at this point, it was cross laid with heavy timber, including fine poplar logs of two feet or more in diameter.  On this was placed a surface of brush and dirt, on which was built the grade of the Kossuth improved stone road around 1897.